So what’s so special about Wheeling, a small city in West Virginia that most people have never heard about?  And why did Johnny and I even bother to stop by this place on our way home from Canada to Atlanta?

Honestly, the only reason Johnny and I knew about Wheeling was because it’s my stepfather’s hometown.  After my stepfather, Don, moved to South Carolina, he visited Wheeling every now and then to see family and to attend his high school reunion.  But being an  indifferent stepdaughter that I was, I never came along and usually halfheartedly listened to what my mom had to say about those trips back home.

But somehow my lack of enthusiasm for Wheeling disappeared last minute when I realized that we would be passing through West Virginia during our fifth-year wedding anniversary road trip.  Our itinerary was: Niagara Falls, Canada – Buffalo, NY – Pittsburgh, PA – Lexington, KY – home in Atlanta, GA.  Wheeling, it turned out, was only an hour drive southwest from Pittsburgh.  So there was no excuse not to visit Don’s birthplace.

As we were leaving Pittsburgh, I searched for things to do and sights to see around Wheeling.  The first thing that came up was a website for a festival that was being held on that very same day.  The event was called Wheeling Heritage Port Sternwheel Festival.  I was really excited that we happened to be in the area to see what it’s all about.  But before I write more about the festival itself, let me give you a brief introduction on Wheeling, and point out a few landmarks that make it a really cool town to visit.

– Nestled in the foothills of the Appalachian Mountains along the Ohio River, Wheeling was the first state capital of West Virginia.

– The city includes Wheeling Island, the most populated island in the Ohio River.  The island is known for its two favorite local attractions:  the Wheeling Island Racetrack and Gaming Center at Wheeling Downs and Wheeling Island Stadium, home of the West Virginia State Football Championships. 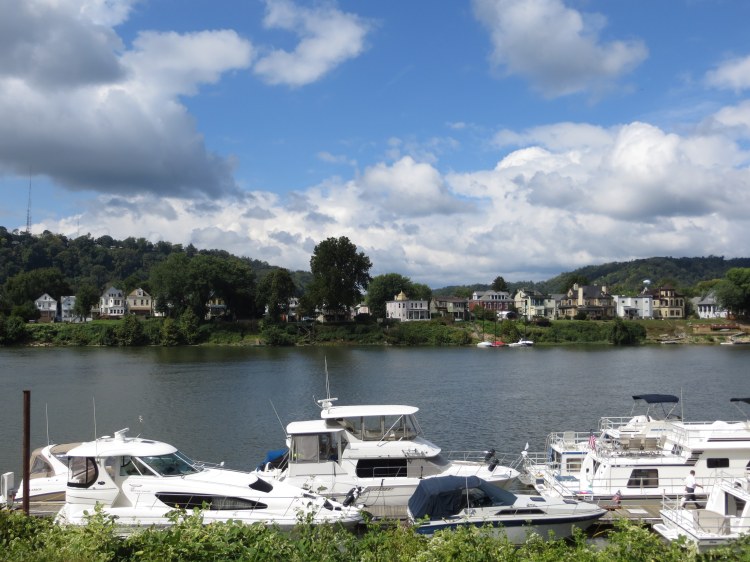 Historic homes on Wheeling Island, seen from the riverbank of the city of Wheeling

– Wheeling started to flourish with the arrival of the National Road in 1818.  The National Road connected the Ohio River with the Potomac River on the east coast; and with Wheeling being the endpoint, it became a gateway to early western expansion. 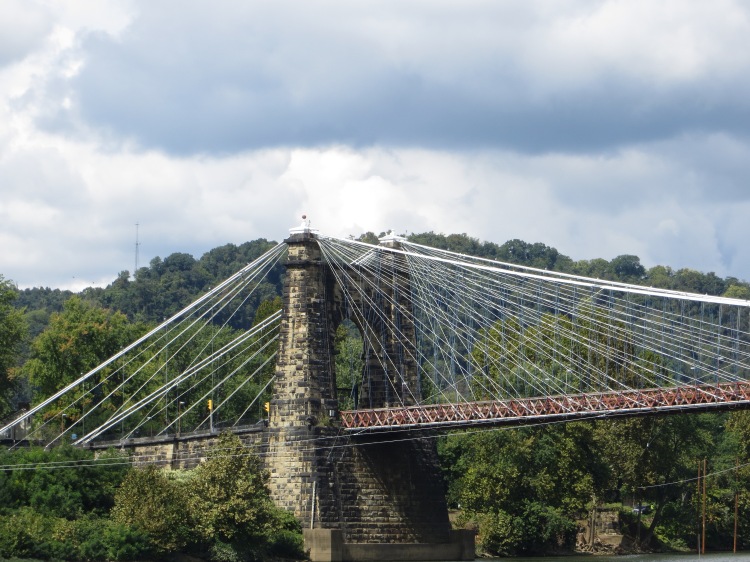 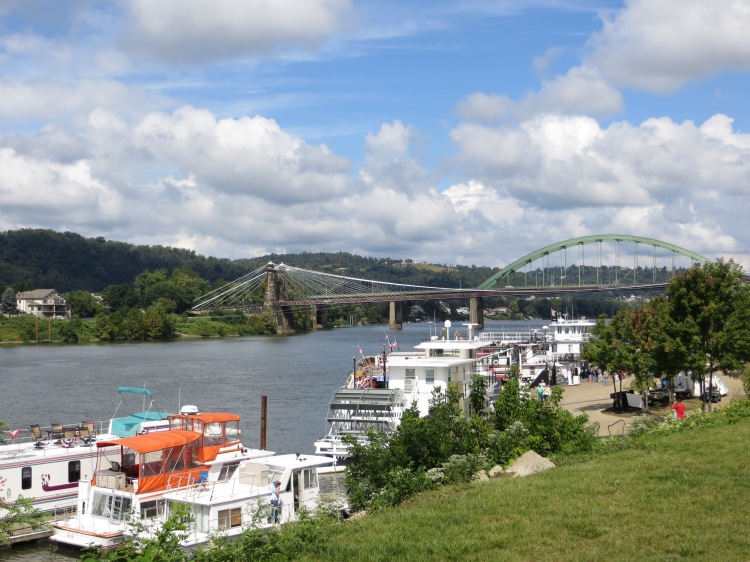 The Wheeling Suspension Bridge and the Fort Henry Bridge provide Wheeling Island with access to the rest of West Virginia.

So there goes a little bit of background and history on Wheeling, a city that once held a relatively significant role in 19th century North America.

Fast forward to September 13, 2013.  Johnny and I found ourselves strolling along the Ohio River to check out the festivities happening at the Heritage Port.  I learned that since 2002, every year during the second week of September paddleboat owners gather along the riverbank in Wheeling for late summer fun of fellowship, good food, musical performances, and fireworks.  The event is modeled after other Sternwheel Festivals that take place in the summer time up and down the Ohio River.

Note: Click this link provided by the Ohio River Sternwheel Festival if you are not familiar with the different types of paddleboats or paddlewheelers.

The hunger-inducing smells of barbecue and fried food permeated the fresh mountain air as we walked past food trucks that lined Water Street/Greater Wheeling Trail.  A band was playing at the waterfront amphitheater against a backdrop of historic homes across the river on Wheeling Island.  And most folks had a friendly smile on their face, from the local police officer to the older gentleman who was eager to share his story growing up in this pleasant town.  All this, plus the fun of inspecting unique riverboats of all shapes and sizes (and chatting up with their owners). 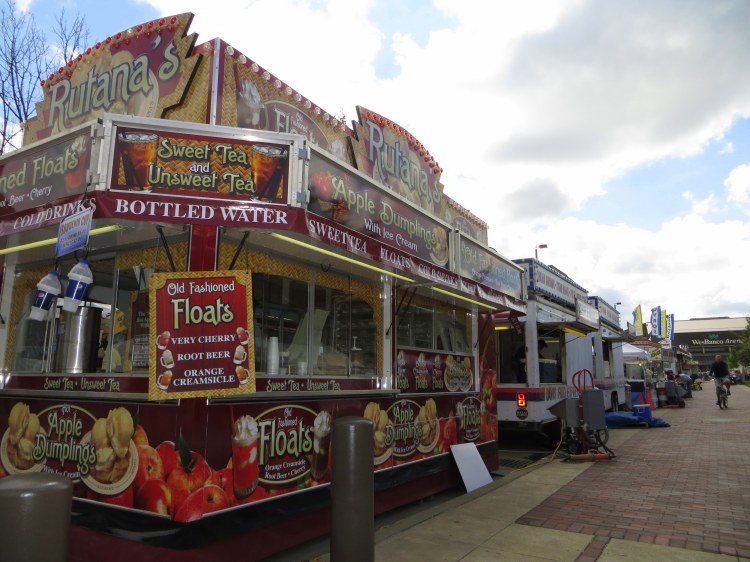 What Johnny and I look forward to from every festival we attend: the food!

The waterfront amphitheater hosts numerous festivals during the summer months.

I had never seen a gathering of this many riverboats all at one time. 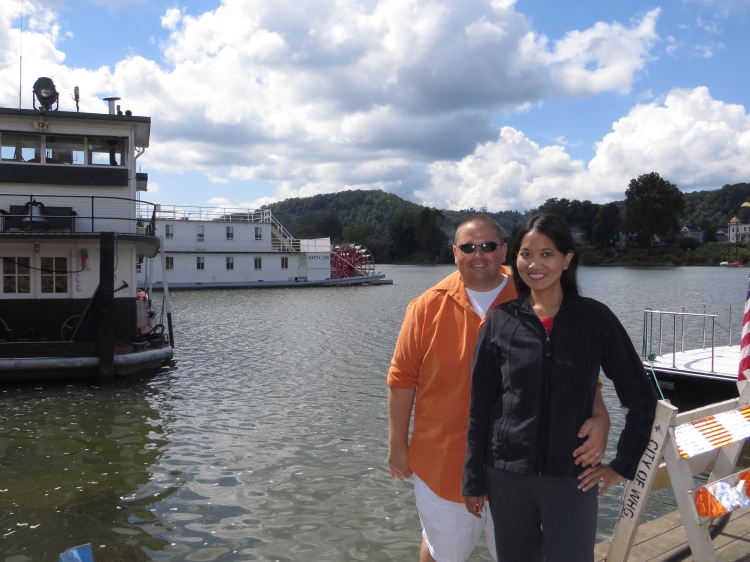 After enjoying some barbecue and getting a to-go-order of a stack of fried seafood, we hurried back to the car to continue our journey to Lexington, Kentucky.  Although it was just a brief visit, I was proud for taking the time not only to experience a little bit of West Virginia, but also to pay homage to my stepfather who has been there for me ever since I moved to the United States.